Cape Town – Egyptian giants Al Ahly have confirmed that Pitso Mosimane will stay on as coach at the club until the end of the season.

AI Ahly said on their website that the director of marketing and contracts for the club, Amir Tawfiq had set down with Mosimane and the two parties had agreed that he would stay on at least until the end of the season.

It was also agreed that there would be no amendments to the coach’s salary.

“Amir Tawfiq, director of marketing and contracts for the club, revealed the details of what took place in the session he held with Pitso Mosimane, coach of the first football team. He said that it was agreed to complete the current contract that ends at the end of the 2021/2022 season without any amendment to the coach’s salary, and that Pitso did not ask for any increase in his salary,” read the statement on the website.

Al-Ahly said they were committed to “continuing in his (Mosimane) mission because of his conviction in his capabilities and ability to achieve the ambitions of the club and its fans during the next stage.

“Mosimane expressed his happiness to work in Al-Ahly and his desire to complete his career and write a history with the Century”.

Media reports had indicated earlier this week that the 57-year old could leave the club if negotiations for a new contract were not resolved. 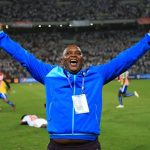 Subs steal show from Aubameyang and Salah in dramatic draw