Johannesburg – Nigerian club Plateau United crashed out of the CAF Confederation Cup on Wednesday with a late collapse in Libya costing them a group place.

Al Akhdar won the second leg of a play-off 3-0 in Benghazi to qualify on away goals after losing 4-1 in Abuja seven days ago in the African equivalent of the UEFA Europa League.

Plateau, downgraded to the Confederation Cup after losing to Esperance Tunis in the CAF Champions League last month, looked set to win the play-off when trailing 1-0 on 85 minutes.

But the never-say-die spirit of the Libyans brought further goals from Mohamed Alkesta and Mostafa Hamza, in added time, to take Akhdar to the mini-league phase for the first time.

Anas al-Werfali was the other scorer for Akhdar, whose home ground 195 kilometres (120 miles) east of Benghazi in Bayda, does not meet international standards.

Plateau were slammed on social media after being eliminated with supporters stunned that United could let such a promising first-leg advantage evaporate.

In a second clash between Libyan and Nigerian clubs in Benghazi, there was a better outcome for the west Africans with Rivers United drawing 1-1 against Al Nasr to progress 6-1 on aggregate.

Abdul al Fitouri scored for the hosts as half-time approached, but any hopes Nasr had of staging an even more dramatic comeback than Akhdar were dashed on the hour when Nwangwa Nyima levelled.

The Akhdar triumph was but one of several shock outcomes in north Africa with title-holders Renaissance Berkane of Morocco and Club Africain and CS Sfaxien of Tunisia unexpected victims.

Berkane, who reached three of the last four Confederation Cup finals and won two, were held 0-0 by Tunisian visitors US Monastir and lost the tie 1-0 on aggregate.

Former African champions Club Africain would have fancied their chances of making the 16-team group draw after forcing a 0-0 draw against Young Africans in Tanzania last week.

But after a further 79 minutes without a goal, Burkina Faso international Stephane Aziz Ki scored to give the Dar es Salaam outfit a tie-deciding 1-0 victory in Rades near Tunis.

But Kara defied the odds to draw 0-0 and become the first club from the small west African nation to reach the group stage, the draw for which will be made in Cairo on November 16.

Police had to separate rival supporters after they clashed in Indian Ocean port city Durban before TP Mazembe from the Democratic Republic of Congo beat local side Royal AM 1-0.

An Adam Bossu goal just before the half-time put the overall outcome beyond doubt after five-time African champions Mazembe had built a 2-0 first-leg advantage.

On a mixed night for South Africa, Marumo Gallants won 3-0 at home to Al Ahly Tripoli of Libya to progress, but Cape Town City were eliminated after losing 1-0 away to USM Alger of Algeria. 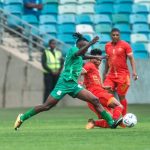