Algiers – The UN’s Western Sahara envoy, Staffan de Mistura, met on Saturday with representatives of the Polisario independence movement in Algeria as part of a regional tour, Sahrawi sources said.

The Algerian-backed Polisario Front wants an independent state in the Western Sahara, a vast stretch of mineral-rich desert which Morocco sees as a sovereign part of its own territory.

The camp is located in Tindouf, where the Polisario Front is based in far southwestern Algeria near the borders with Morocco and Western Sahara.

Announcing the visit on Friday, a UN spokesperson said de Mistura was “looking forward to deepening consultations with all parties concerned on the prospect of constructively advancing the political process in Western Sahara”.

The Italian-Swedish diplomat also met a group of Sahrawi youth and women, according to the Sahrawi news agency SPS.

On Sunday, he is scheduled to hold talks with Polisario leader Brahim Ghali, the movement’s UN representative told AFP.

De Mistura was appointed in November and undertook his first mission in July, travelling to Rabat to meet Moroccan officials before delaying a planned trip to Western Sahara.

A former Spanish colony, Western Sahara sits on the western edge of the vast eponymous desert, stretching along the Atlantic coast.

When Spain withdrew in 1975, Morocco sent thousands of people across the border and claimed it was an integral part of its territory.

The following year the Polisario Front declared a Sahrawi Arab Democratic Republic (SADR), with support from Algeria and Libya, and demanded a referendum on self-determination.

Since then 84 UN member states have recognised the SADR.

But a stalemate ensued, and Morocco built razor-wire-topped concentric sand walls in the desert that still ring 80 percent of the territory that it controls.

Under a 1991 ceasefire, the UN, which considers the Western Sahara “a non-self-governing territory”, deployed a peacekeeping mission.

The international community has long backed a referendum to be held to decide the territory’s status.

But Morocco rejects any vote in which independence is an option, arguing that only granting autonomy is on the table for the sake of regional security. 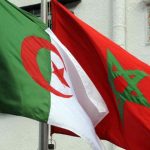 Macron calls for ‘new pact’ with Algeria in reconciliation visit