Rabat – Morocco has recalled its ambassador in Tunis for consultations and cancelled its participation in a pan-African investment conference, it said Friday, after Tunisia’s president hosted the head of the Polisario movement.

The Polisario wants an independent state in the Western Sahara, a vast stretch of strategically valuable, mineral-rich desert Morocco sees as a sovereign part of its own territory.

Polisario chief Brahim Ghali, who is also president of the self-proclaimed Sahrawi Arab Democratic Republic, met with President Kais Saied after arriving in Tunisia on Friday to attend the Japanese-African investment conference TICAD.

In a statement, Morocco’s foreign ministry said the move was “hostile and prejudicial to the fraternal relations that the two countries have always maintained” and that it would “immediately” recall its ambassador and withdraw from the TICAD summit.

“The welcome rolled out by the Tunisian head of state for the head of a separatist movement (Polisario chief Brahim Ghali) is a grave and unique act that deeply hurts the feelings of the Moroccan people,” it said.

“Tunisia, against the advice of Japan and in violation of the process of preparation and established rules, decided unilaterally to invite” the Polisario, it said.

A Moroccan diplomatic source told AFP that the move was “new, unacceptable and above all unnecessarily provocative”.

“Tunisia has allowed itself to harm a cause that is sacred for all Moroccans,” the source said.

The move came as French President Emmanuel Macron was visiting Morocco’s arch-rival and Polisario backer Algeria for a high-profile, three-day visit aimed at fixing ties with the former French colony.

It is not the first time that Ghali’s travels have sparked Moroccan anger.

In April 2021, he headed to Spain to be treated for Covid-19, sparking a year-long diplomatic row between Spain and the North African kingdom.

That only ended after Madrid dropped its decades-long stance of neutrality over the Western Sahara — a former Spanish colony — and backed a Moroccan plan for limited self-rule there. 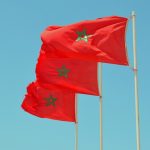