Jacques Nienaber has admitted he can’t explain why the Springboks started poorly and did not capitalise on their opportunities in the first half against the Wallabies, but would not be drawn to comment on Faf de Klerk’s yellow card. DYLAN JACK reports.

The 25-17 defeat meant the Springboks failed to beat the Wallabies in Australia for the sixth straight game and it was Australia’s third consecutive Test win over South Africa, after back-to-back victories at home last year.

The Boks had their opportunities in the first half, but could only get three points despite the Wallabies being reduced to 14 men after wing Tom Wright was yellow-carded.

“I think it’s 50-50. Hats off to Australia, their defence was good. We didn’t capitalise. We are all emotional now. We will have to look and see why. We camped down in their 22, but didn’t get any conversion of points.”

Faf de Klerk was controversially yellow-carded towards the end of the first half for ‘striking’ opposite number Nic White when attempting to disrupt the ball from a Wallabies scrum.

Wallabies scrumhalf White did his best to exaggerate the incident with antics that belonged on a football field, but it was enough to convince referee Paul Williams to send De Klerk to the sin bin.

“I am going to try and stay clear of that,” Nienaber said on the incident. “It is what it is. The referee has made the decision and we have to live with it. The yellow came at a bad time, they capitalised nicely on it. It’s not nice to lose a nine, especially on defence.

The Wallabies fully exploited their numerical advantage in the second half, opening up a 12-point lead through Marika Koroibete’s try, whereas the Springboks failed to do the same when Wright was sent to the sin bin in the first half.

“To be honest, we will have to have a look at it. I am not sure,” Nienaber said on why the Springboks could not capitalise on their numerical advantage.

“Maybe a bit of naive tactics from our side. Last week, when New Zealand went down to 14 men I thought we were a little bit naive in terms of how we as the coaches handled it, closing out those last seven minutes. We could have kept the ball in hand a little bit more, but we addressed that.

“I thought we as the coaches could have been more clinical and clear with messages coming from on top. Tonight, I am not sure and will have to have a look it. When we went down to 14, they put us under pressure, but when they were 14 men, we struggled to put the ball into the space where that winger would have been.”

Once again, as they did against the All Blacks at Ellis Park and Wales at Loftus Versfeld, the Springboks started sluggishly and gave the Wallabies a 10-point lead in the first seven minutes.

In the opening nine minutes, the Wallabies had an overwhelming 97% of possession, played most of the game in South African territory and the Boks missed six tackles.

Nienaber was also at a loss for an explanation as to why the Springboks lack intensity from the start.

“I can’t put my finger on that. I don’t think you can control a good start,” said Nienaber. “They started the game, we expected the ball to come down the middle and they won the turnover, put pressure and scored. You can’t plan for a good start, but you can plan to bring intensity.

“I don’t know why that happened, to be honest.” 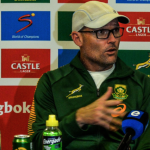