Goma – Fighting resumed on Wednesday in the Democratic Republic of Congo (DRC) between the military and armed group M23, residents told AFP, a day after many people fled rebel-held territory being bombarded by military jets.

Residents told AFP they had heard the sounds of more fighting by the evening, after a tense but quieter day.

“There are detonations of bombs. The army is pounding the positions of the M23,” said one resident of a village outside the commercial hub of Rugari.

Officials said on Tuesday that the DRC’s military used newly deployed jets to bombard M23 positions in the east of the country, as some residents fled across the border.

A mostly Congolese Tutsi group, the M23 first leapt to prominence in 2012 – briefly capturing the main city in eastern DRC, Goma, before being driven out.

Fighting between DRC military and M23 fighters resumes, a day after military jets bombarded rebel bastions, forcing residents to run for their liveshttps://t.co/7IgOAP1UYD

As fighting has escalated, the town of Rugari is thought to be near the current frontlines, 30 kilometres (18 miles) from Goma.

The UN said on Wednesday that at least 188 000 people had fled their villages since October 20, the start of the new M23 offensive.

At least 16 500 have taken refuge in neighbouring Uganda.

After lying dormant for years, M23 took up arms again in late 2021 claiming the DRC had failed to honour a pledge to integrate them into the army, among other grievances.

The group has won a string of victories against the Congolese army in North Kivu province in recent weeks, dramatically increasing the territory under their control.

Fresh advances prompted the UN peacekeeping mission there to increase its alert level and boost support for the Congolese army. 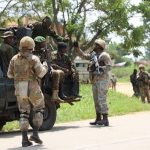