Zintan – Some 30 quad bikes, motorcycles and four-wheel drives are rallying in Libya’s desert – a welcome but rare taste of normality for a nation lashed by the shifting sands of conflict.

At the launch in 2013, organisers of the Al-Hamada rally had envisioned an annual event, yet this year’s episode is only the third to get beyond the starting line.

Competitors from Libya and Tunisia have taken to the drivers’ seats, one of them a woman for the first time in a Libyan rally.

The contest sends a message that the country can pull off “a great sporting event, far from the politics and divisions” that perennially buffet it, organiser Khaled Drera said.

Libya “wants to progress towards the stability that it deserves”, said Drera, who is also a tour guide and an expert on the country’s desert landscapes.

The rally’s name stems from the vast territory at the heart of Libya’s portion of the Sahara, a stretch of tranquillity in a nation repeatedly engulfed by chaos since the fall of Muammar Gaddafi in 2011.

For months now, two rival governments have been vying for power — one based in the capital Tripoli in the country’s west, and the other appointed by the parliament, based in the east.

Clashes between the two camps have repeatedly shaken Libya this year, and notably the capital. A confrontation in late August left at least 30 people dead.

After departing Thursday from Zintan, a mountainous small town around 170 kilometres (105 miles) southwest of Tripoli, the competitors have been driving a course that covers more than 400 kilometres of largely flat and stony ground.

The event finishes on Sunday in Ghadames, a UNESCO world heritage site, dubbed the “desert pearl”, near the border with Algeria and Tunisia.

Touting photos of the bikes and four-wheel drives against a backdrop of palm trees and brilliant golden sand, the organisers hope to attract attention from beyond Libya’s frontiers.

Already, thanks to the presence of the Tunisian team, this year’s rally is an international event, with organisers hoping to extend the competitor base in future.

Tunisian Chaima Ben Ammou – the first woman to compete – said her passion for motorbikes came from her father, who still accompanies her to both national and international fixtures.

“I’ve made a lot of sacrifices to get here, but I have the support of my family,” said the 29-year-old, who has won a motocross championship in Tunisia and has put her law studies on hold to pursue her passion.

She said she did not hesitate in “responding to the invitation of our Libyan brothers”, ditching her motorbike in favour of a Japanese four-wheel drive, even though she has no experience competing in that category.

Wearing a black helmet and with her hair pulled back, she said she knew she was blazing a trail for other women.

“Despite the difficulties, I didn’t chicken out,” she said, from the wheel of her car. 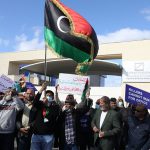 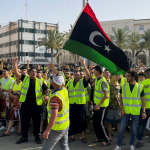