Conakry – Clashes broke out in Guinea on Monday between security forces and protesters calling on the ruling junta to speed up the handover of power to civilian rulers, an AFP journalist saw.

The latest unrest on the outskirts of the capital Conakry came one year to the day after a military coup toppled former president Alpha Conde.

A military-dominated government headed by Colonel Mamady Doumbouya has led Guinea since September 2021.

Doumbouya has pledged to hand over power to elected civilians within three years.

The National Front for the Defence of the Constitution (FNDC), a political coalition, called the demonstration to demand a shorter transition period.

Despite the military junta having banned all rallies since May and having decreed the dissolution of the FNDC last month, scattered demonstrations took place in several districts in the suburbs of Conakry.

In one neighbourhood, about 10 youths were detained, an AFP journalist saw.

In places where people had gathered, businesses were shut and traffic brought to a standstill, with demonstrators attempting to set up barricades which were quickly taken down by security forces.

Security forces’ pick-up trucks were also stationed on the main axis route across the suburbs.

The FNDC, a coalition of political parties, trade unions and civil society organisations, also staged rallies on July 28 and 29 in which five people were killed.

Two teenagers, aged 17 and 19, were shot dead during protests it called for on August 17.

Late Monday, a concert was planned in the city centre to mark one year since the junta took power. 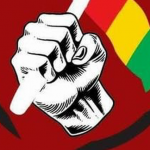