In particular, he said he raised the case of “Hotel Rwanda” hero Paul Rusesabagina, a fierce Kagame critic who was sentenced to a 25-year prison term last year on terrorism charges.

Blinken is in Rwanda on the final stop of a three-nation tour of Africa, as Washington seeks to counter a Kremlin charm offensive following a trip to the continent in July by Russian Foreign Minister Sergei Lavrov.

“As I told President Kagame, we believe people in every country should be able to express their views without fear of intimidation, imprisonment, violence or any other forms of repression,” Blinken told a joint press conference with Rwandan Foreign Minister Vincent Biruta.

Blinken also said he “underscored our concerns about the lack of fair trial guarantees provided to (Rusesabagina)”.

Met with @UrugwiroVillage and @Vbiruta about the U.S.-Rwanda relationship and how to reduce tensions and ongoing violence in the region. We also discussed U.S. concerns about democracy and human rights in Rwanda, including the wrongful detention of Paul Rusesabagina. pic.twitter.com/ZymNMisHDk

In May, the US State Department said Rusesabagina – who has US permanent residency – had been “wrongfully detained” by Kigali.

Rusesabagina, then a Kigali hotel manager, is credited with saving hundreds of lives during the 1994 genocide. His actions inspired the Hollywood film “Hotel Rwanda.”

The 68-year-old has been behind bars for more than 700 days since his arrest in August 2020 when a plane he believed was bound for Burundi landed instead in Kigali.

In a statement issued to coincide with Blinken’s visit, Rusesabagina’s family said his health was deteriorating, with a weak left arm and facial paralysis indicating that he may have had one or more strokes.

Meanwhile, Blinken said he also discussed with Kagame “credible reports” that Rwanda continues to support the M23 rebel group and has its own forces inside the neighbouring Democratic Republic of Congo, claims repeatedly denied by Kigali.

“Any support or cooperation with any armed group in eastern DRC endangers local communities and regional stability and every country in the region must respect the territorial integrity of the others,” he added.

The M23 has captured swathes of territory in eastern DRC in recent months, stoking tensions between Kigali and Kinshasa.

Ties between the two nations have been strained since the mass arrival in the eastern DRC of Rwandan Hutus accused of slaughtering Tutsis during the 1994 genocide, although there was a thaw after DRC President Felix Tshisekedi took office in 2019.

In a statement released Monday, Human Rights Watch had called on Blinken to “urgently signal that there will be consequences for the government’s repression and abuse in Rwanda and beyond its borders”.

The rights watchdog urged Blinken “to highlight systematic human rights violations, including crackdowns on opponents and civil society, both within and across Rwanda’s borders.”

Rwandan opposition leader Victoire Ingabire echoed HRW’s calls, telling AFP that Blinken should raise the issue of journalists and politicians she said were in prison for challenging Kagame’s government.

“Blinken has to ask our government to open up political space to everyone who wants to be active in politics,” said Ingabire, who spent six years in jail on terrorism charges.

US Secretary of State leaves DRC for Rwanda 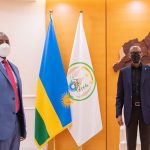 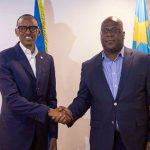