“We know he is in hiding, but if he comes out, he will be arrested,” an official from the interior ministry’s search unit told AFP.

Gomes, 68, who was head of government between 2018 and 2020, disputed President Umaro Sissoco Embalo’s electoral victory in 2019 and was dismissed from his role.

He had been living under diplomatic protection or in exile abroad until his return home.

After months of confusion, the international community finally accepted the fait accompli of his presidential victory in 2020.

Gomes is a prominent figure in the African Party for the Independence of Guinea and Cape Verde (PAIGC), a party that has dominated political life since 1974 but was defeated in the presidential vote.

He had in March 2020 taken refuge at the United Nations office in Guinea-Bissau, where he remained for 11 months until February 2021.

Saying he feared for his safety, he was given permission to leave the country on international intercession and had been living in France.

He returned at the end of last week to attend the 10th PAIGC Congress.

Police officers burst into the hall on Friday to arrest him. He managed to escape, protected by dozens of his party’s militants, and has been in hiding since then.

He sent a message on Monday saying he feared for his life.

The judiciary has issued a warrant for his arrest.

Gomes is wanted for alleged financial malpractice dating back to 2019 when he was still prime minister, according to a prosecutor’s magistrate speaking on condition of anonymity.

“He is in good health, but we have not yet seen him,” said one of his lawyers, Carlos Pinto Pereira.

“We are ready to take him before an investigating judge if all procedures are respected,” he added.

A correspondent for AFP noted that plainclothes agents were discreetly stationed on the main exit roads of the capital.

A coast watch has also been set up, a coast guard told AFP.

Since its independence in 1974, Guinea-Bissau, a former Portuguese colony, has seen a string of putsches and attempted coups, the latest of which took place on February 1 this year.

The president dissolved parliament this year and announced early elections for December 18. But it is doubtful they will take place on that date. 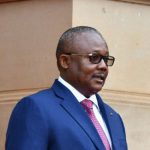