The acting minister of health, Mmamoloko Kubayi, has taken a swipe at political parties that are critical of the South African Health Production Regulatory Authority (Sahpra), saying the body should not be forced to authorise the use of vaccines “at a whim”.

“Our country’s regulatory system should not be forced to bow down to any amount of political pressure, particularly, to authorise the use of vaccines at a whim without due process being followed. This is dangerous and should not be condoned in democratic South Africa,” Kubayi said in a statement.

25 June 2021
MEDIA STATEMENT
The Acting Minister of Health, Mmamoloko Kubayi, appeals to citizens to a give space to the South African Health Regulatory Authority (SAHPRA) to do its work. https://t.co/hlOZJ5c3Qd

She said attacks directed at the leadership of the institution were disappointing and reprehensible.

“The targeting of SAHPRA by political parties is unfortunate and threatens the mandate and authority of the regulatory authority and experts tasked with ensuring the safety of newly developed health products for the wellbeing of all,” said Kubayi.

The acting minister’s remarks came a day after the Economic Freedom Fighters (EFF) party supporters protested, demanding a speedy provision of vaccines to all citizens.

The EFF marched in Pretoria on Friday, under the banner of “March to Save Lives”, as they demanded that Sahpra speeds up the approval of Russia’s Sputnik V vaccine and the Chinese Sinovac manufactured Coronavac vaccine.

The EFF leader Julius Malema indicated this week that his party woud give the health regulator seven days to give Sinovac and Sputnik V the green light for emergency use in the country.

He said if Sahpra failed to do so, the party would stage a sit-in outside the house of Sahpra’s CEO.

But Kabayi said in her statement that: “The regulator (Sahpra) has consistently outlined to the public processes that need to be followed before the registration and approval of any vaccines to be used as part of government’s efforts in the fight against Covid-19.”

She added: “This cannot be done in the absence of any clear information about the efficacy of products that have not undergone rigorous testing by the regulator.” 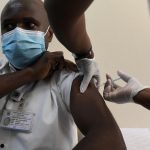