In the video, two police officers are seen attacking the man while he is on the ground.

One police officer is pinning the man to the ground while the other officer continuously hits him with a stick despite pleas from onlookers.

“Leave him alone. Stop it. What are you doing? This is police brutality,” a woman can be heard saying in the footage.

The officers eventually leave the man on the ground, while the other officer charges towards one of the onlookers who is recording the incident.

Thank you for the notification.IPID Communication unit has been notified of the Assault and the video by a member of the public. The matter was escalated to IPID Western Cape & they are looking into the matter. The office will provide feedback as soon as they complete their work. https://t.co/swz3ahy2LC

The man who had been assaulted says he was trying to report his missing girlfriend.

One of the onlookers asks him why they hit him then and he says:  “Because they wouldn’t help me.”

He says this, as he tries to catch his breath.

The matter is under investigation and has been escalated to Ipid Western Cape after a member of the public notified them of the assault and video, said Ipid in a tweet.

“Two CPF members immediately attended the station to enquire about the well-being of the individual who was arrested and to formally bring the video evidence to SAPS attention. We were refused permission to speak with the prisoner or any information on his condition – which we accept is within the shift commander’s prerogative. We have been informed that the prisoner was eventually taken to hospital for a medical examination after the night shift staff came on duty.
“However, the shift commander also refused to accept the video into evidence and to provide an OB reference for our visit. The CPF members objected to the shift commander who responded with hostility,” said Mills. 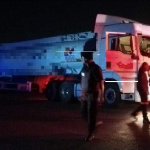