Washington – The United States on Tuesday warned Burkina Faso’s junta of the risks of allying with Russia, whose shadowy Wagner paramilitary group has voiced robust support for the latest coup.

“Countries where the group has been deployed find themselves weaker and less secure, and we’ve seen that in a number of cases in Africa alone,” State Department spokesman Vedant Patel told reporters.

“We condemn any attempt to exacerbate the current situation in Burkina Faso and we strongly encourage the new transitional government to adhere to the agreed-upon timeline for a return to a democratically elected, civilian-led government,” he said.

The impoverished Sahel state plunged into turmoil over the weekend when Lieutenant Colonel Paul-Henri Sandaogo Damiba, who had seized power only in January, was toppled by a newly emerged rival, 34-year-old Captain Ibrahim Traore.

A small group of demonstrators in the capital Ouagadougou on Tuesday chanted support for Russia and against France, the former colonial power that has long been the main power in West Africa.

Speculation was further heightened when the Wagner group’s normally taciturn founder, businessman Yevgeny Prigozhin, saluted Traore over social media, saying he and his troops “have done what was necessary” for “the good of their people.”

The unit has been accused of rights abuses in the Central African Republic, Libya, Syria and increasingly in Ukraine and has been described by critics as a shadow army for Russian President Vladimir Putin.

Prigozhin – dubbed “Putin’s chef” due to his catering contracts – previously denied a role with Wagner but last week confirmed he founded the group in 2014, saying the original goal was to send “patriots” into eastern Ukraine. 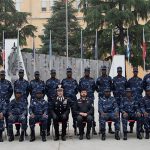