Kinshasa – The Democratic Republic of Congo, Brazil and Indonesia are working to present a common front at climate negotiations, the Congolese Environment Minister Eve Bazaiba said on Tuesday.

All three countries have vast tropical rainforests threatened by logging and agriculture.

Bazaiba, addressing reporters at the informal pre-COP27 talks in the DRC’s capital Kinshasa, said she believed the three countries could achieve an agreement on forest protection issues in climate negotiations.

Indonesia, the Democratic Republic of Congo, and Brazil are working to present a common front at climate negotiations, the Congolese Environment Minister Eve Bazaiba said on Tuesday. #jakpost https://t.co/K7sEQagSfd

The informal talks come ahead of the COP27 climate summit, due to be held in Egypt’s Sharm el-Sheikh from November 6-18.

Bazaiba said the DRC, Brazil and Indonesia will aim to examine how to preserve forest cover “while moving towards development”.

They will also focus on issues such as access to climate finance and the price of a tonne of carbon in the carbon-credit market.

Leonardo Cleaver de Athayde, director of the department of sustainable development at the Brazilian foreign ministry, also told reporters he hoped the three countries could draw up “a joint work programme”.

The DRC, which is home to 60 percent of the vast Congo Basin rainforest, has faced criticism for launching an auction in July for oil and gas blocks, some of which are in sensitive areas.

The impoverished central African nation maintains that developing its fossil resources is an economic imperative. 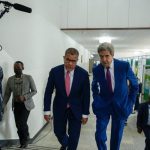 US climate envoy asks DRC to ditch some oil blocks 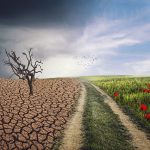 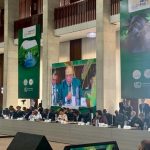