Cape Town – A foreign national, who allegedly attacked four people with an axe, appeared at Kwamhlanga Magistrate’s Court on two murder charges and two charges of assault with intent to cause grievous bodily harm.

The Zimbabwean national, Sam Mhlanga Sam, was arrested on Sunday after allegedly hacking his uncle and a woman to death in Mountainview, Kwamhlanga, on October 31.

Mhlanga allegedly attacked his 60-year-old uncle with an axe, fatally wounding him following an argument, police said in a statement.

According to police spokesperson in Mpumalanga, Brigadier Selvy Mohlala, the suspect later attacked two other women in a different part of Mountainview.

“It has also come to the attention of the police that after the gruesome murder, the suspect proceeded to a different section in Mountain View where he allegedly attacked a local woman with an axe and she unfortunately succumbed to the injuries later in hospital.

“The suspect further attacked another female who was carrying a baby on her back. During that attack, the child too sustained some injuries,” Mohlala said.

The matter was reported to the police and an investigation followed.

Mhlanga was cornered by the police and arrested in Tweefontein following the incident.

On Monday he appeared in the Tweefontein Magistrate’s Court for allegedly contravening the Immigration Act. The case was postponed to November 15.

Boyfriend detained under police guard in hospital after the brutal murder of his girlfriend, 17, and her granny, 63

R50 000 reward offered in hunt for killers of German tourist 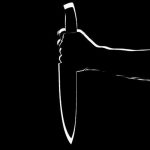 Woman stabs her son, 13, to death, leaves him lying in a pool of blood