Cape Town – Two grade 10 pupils from Lesiba Secondary School in Daveyton, Gauteng, died on Wednesday after one of them shot the other before shooting himself, Gauteng Education spokesperson Steve Mabona said on Wednesday.

According to News24, the pupils were said to have quarrelled during school hours.

When they finally met outside of school premises, one of them pulled out a gun and shot the other before killing himself.

“It is tragic to lose pupils at the hands of violence as the academic year begins. We wish to send our sincere condolences to the families of those pupils. We also urge our pupils to always refrain from any form of violent behaviour,” The report quoted Lesufi as saying.

The two pupils were said to have been both 16 years old of age, according to an IOL report, adding that it remained unclear what argument drove them to such lengths.

Police were still investigating the circumstances surrounding the shooting.

“We are also having the situation where we don’t understand what would have transpired, what kind of a quarrel that could lead someone to go to an extent of using a firearm and taking his life as well. We will leave it to the police, because they have already started with their investigation,” the report quoted Mabona as saying. 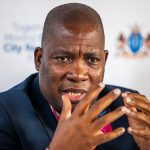