Kinshasa – Twelve people have died and thousands have fallen ill after a river in southern Democratic Repoblic of Congo was polluted by toxic waste from a diamond mine, the government said.

Pollution of the Kasai River came to light in July, when local residents said its waters had turned red and dead fish were seen floating at the city of Tshikapa, near the Angolan-owned mine.

In addition to 12 fatalities, whose cause of death is unknown, 4 502 cases of diarrhoea and skin-related illness have been recorded, Environment Minister Eve Bazaiba said late Thursday.

“This catastrophe was caused by an Angolan mining company, which has acknowledged the facts,” she said, reporting on the findings of an expert bilateral commission of inquiry.

In July, Bazaiba linked the pollution to a “spill of toxic substances by an Angolan factory specialising in industrial diamond mining”.

Local officials also saw dead hippos in the Kasai, a major tributary to the Congo, the second longest African river after the Nile.

Four out of the five administrative territories in Kasai province have been affected by the disaster, totalling 968 000 people, the probe found.

The provincial authorities banned consumption of the river water, but it was too late to avoid some people falling sick.

The government said 40 tonnes of medication to the area and the national water company is taking steps to increase supplies to those affected.

“Compensation should be paid to those who are victims, on the basis of the polluter-pays principle,” the government said. 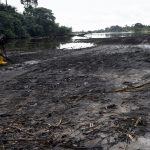