Gao – After nine years deployed in Mali, France is organising a drawdown, with troops preparing to leave the last of three bases in the far north of the insurgency-hit and poverty-wracked country.

French troops were sent to Mali in 2013 by then-president Francois Hollande to tackle the rebels affiliated to Al-Qaeda or Islamic State in the arid north.

Paris has since deployed around 5 100 troops across the Sahel region, which includes Mali, helping to support local governments and their poorly-equipped forces fight an ever-growing Islamist insurgency that has left thousands dead.

But after leaving the Kidal and Tessal bases in north Mali, French troops are now packing up in Timbuktu.

“We’re training Malian forces in holding their ground and in guiding air support before they take over from us,” a commander in charge of the withdrawal in Timbuktu told AFP giving only his rank, captain, and first name, Florian.

Around him, several dozen soldiers could be seen packing boxes, taking down a basketball hoop, or sorting through medical supplies and tents.

All the material is being sent south by road to the French base in Gao.

“Everything is being sorted, labelled, then either destroyed, re-used here or sent back to France,” Major Christelle explained, surrounded by piles of camp beds as well as spare parts for vehicles.

French President Emmanuel Macron announced a major drawdown of French troops in June and is hoping other EU forces will step up to support what he sees as an essential counter-terror mission keeping Europe safe.

New reductions are expected by 2023.

The focus of French operations will now be a particularly volatile and strategic zone known as the “three borders” where the frontiers of Niger, Mali and Burkina Faso meet.

And French forces will no longer patrol to secure ground areas, instead focusing on providing air support to local soldiers and carrying out targeted anti-terror raids.

In September, Macron announced that French troops had killed the head of Islamic State in the Greater Sahara (ISGS), while the head of Al-Qaeda in the Islamic Maghreb (AQIM) was reportedly killed last year.

Macron declared the “profound transformation” of France’s military presence in the Sahel in June amid questions over both the financial cost of the nearly decade-long mission and its rising human toll.

The anti-insurgency effort has claimed the lives of 52 French soldiers in combat.

But Paris also faces increasing difficulties on the ground including with local people who resent the presence of soldiers from the former colonial power, as well as new regimes in partner countries.

Protests that were once isolated to urban centres have spread to rural areas, fanned by social media and anger at the ever-worsening violence, as well as highly-publicised incidents of troops mistakenly killing civilians.

In November, protesters in Burkina Faso and Niger hampered a large French military supply convoy travelling from Ivory Coast to Mali. Some threw stones and held signs saying “Down with France”.

Relations are also tense with some partner governments in the region, particularly with the new leaders of Mali after two military coups since August 2020.

Interim prime minister Choguel Kokalla Maiga accused France of a “sort of abandonment” at the UN general assembly in September, leading Macron to brand the comments “a disgrace” and say French troops would not compensate for the “non-work” of the Malian state.

Maiga also accused France of training a “terrorist group” in the north of the country in an interview with Russian news agency RIA Novosti.

“What I find striking in Mali is the major gap between the cooperation on the ground between Europeans and the Malians and the difficulties of the political dialogue,” French MP Thomas Gassilloud, who was recently in Mali, told AFP.

As France withdraws, it also faces increased competition from Russia in a region where it has operated almost exclusively as the foreign power since the end of colonialism in the middle of the last century.

Paris’ hopes are fixed on beefing up a separate European defence force in the Sahel, known as Takuba.

At its headquarters, Swedish, Czech and Italian forces are at work, although French troops are set to form “the backbone” in Macron’s words.

The gamble is that a smaller French force, working with European partners, can help build up local soldiers capable of stemming the spread of Islamist insurgents — the same failed strategy used by the United States in Afghanistan. 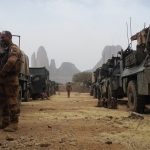