“Be assured that the commitments made by Burkina Faso to the international community will be honoured,” Damiba told the press during a brief visit to the country’s neighbour.

Under the promised 24-month transition, the junta “will organise elections for the return to normal constitutional order,” he said.

Damiba’s trip to Ivory Coast comes on the heels of a visit to Mali on Saturday – his first official foray abroad since January’s military takeover.

Starting in northern Mali in 2012, the insurgents attacked neighbouring Burkina Faso and Niger in 2015, launching an offensive that has killed thousands and forced some two million people from their homes.

In recent years, the insurgents have mounted sporadic raids on northern Ivory Coast, which shares a nearly 600-kilometre (370-mile) border with Burkina.

Ivorian President Alassane Ouattara vowed his country’s “total support” for the junta’s “efforts” against the jihadists.

“Terrorist attacks are a concern for the entire sub-region,” he said.

“We should do everything to support each other, to continue to exchange information and have cooperation among security forces.”

On Sunday, Damiba in a nationwide address, said Burkina’s armed forces had “intensified offensive actions” against the jihadists and acquired new equipment.

A “relative calm” had returned to parts of the east, north and centre-north, which have borne the brunt of the attacks, he said.

Asked in Abidjan whether he was playing a role in efforts to resolve a spat between Mali and Ivory Coast, Damiba said he hoped “a solution can be found” between the two countries themselves.

Forty-nine Ivorian troops were arrested on July 10 after they arrived at the airport at Bamako, the Malian capital.

They were then placed in custody and charged with attempting to harm state security. Ivory Coast is demanding their release, saying they were simply sent to Mali to provide backup duties for the UN peacekeeping mission.

Three women who were among the 49 were released, officials from Mali, Ivory Coast and Togo, which has been acting as mediator, said on Saturday.

Ivory Coast is a key member of the Economic Community of West African States (ECOWAS), which is struggling with a string of military coups in the region in the past two years.

The Malian junta has accused Ivory Coast of encouraging the bloc to impose harsh sanctions against it, which were lifted in July. 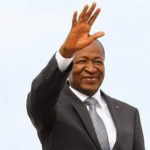