Cape Town – Economic Freedom Fighters (EFF) leader Julius Malema had the people of the Northwest province on their feet when he showed them his dance moves at a rally over the weekend.

Malema has been campaigning across the country in preparation for the local municipality elections on November 1.

[HAPPENING NOW 🎥]: Ntando Duma, Uncle Vinny and T-bose from Skeem Sam, Cornet Mamabolo arriving at Lekwa Teemane Ward 2, to further encourage our people to to vote and to #VoteEFF for #LandAndJobsManje pic.twitter.com/HAhfURUCYp

We need a president who understand and vibe our music 🤞🤞😍🙌🙌🙌🙌
Julius Malema doing the most@EFFSouthAfrica @Julius_S_Malema pic.twitter.com/eUJkRLLZ7u

Yooo you’ve got viiibe … I so wish to come to you campaign festivals, groove have fun

Me thinking of voting for EFF pic.twitter.com/ATNbCZQc1V

I am definitely looking forward to vote for the EFF

In Zimbabwe, Nelson Chamisa is being stoned by zanoids during campaign.

In South Africa, Julius Malema is dancing amapiano during campaign. 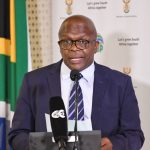