China has fully vaccinated more than one billion people against the coronavirus – 71 % of its population – official figures showed on Thursday.

The country had mostly curbed the virus within its borders but is racing to get the vast majority of its population vaccinated as a new outbreak takes hold in the southeast.

As of September 15, 2.16 billion vaccine doses have been administered nationwide.

The government has not publicly announced a target for vaccination coverage, but top virologist Zhong Nanshan said last month that the country is likely to have 80% of its population inoculated by the end of the year.

China is currently battling an outbreak of the Delta variant in the southeastern province of Fujian that has infected almost 200 people so far in three cities, many of whom are schoolchildren.

The Fujian cluster is the biggest rebound in weeks and comes after the country declared the Delta variant under control, in a test of China’s “zero-case” approach to the pandemic.

China reported 80 new cases on Thursday, of which 49 were domestic transmissions. 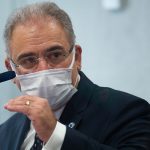