Dakar – A court in Senegal’s capital Dakar on Wednesday postponed an appeal hearing from a leading opposition figure, whose arrest on his way to court last month provoked violent clashes.

Barthelemy Dias, the mayor of one of the district’s in the seaside capital, is a staunch critic of Senegalese President Macky Sall and plans to stand for mayor of Dakar in January.

He was due to appear in court on November 10 in connection with an incident in 2011 where a man was shot dead as political violence wracked the West African country.

However, clashes between his supporters and the police broke out on the day of the court date.

Ahead the hearing, Dias had accused the authorities of plotting to sabotage his run for city mayor.

The unrest raised fears of a repeat of deadly nationwide clashes that broke out in March, after opposition leader Ousmane Sonko was summoned to a judge to answer to a rape charge.

Sonko and Dias are political allies.

On Wednesday, the Dakar court decided to postpone Dias’ hearing until March 2, according to an AFP journalist present.

The opposition figure was handed a two-year sentence in 2017, of which 18 months were suspended, for his alleged connection to the shooting in 2011.

Dias has appealed the verdict, but the appeal hearing has been postponed several times. 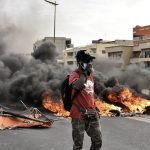