Sharm el Sheikh – United Nations officers running security at the COP27 climate summit in Egypt said on Monday they are probing allegations of surveillance and misconduct by Egyptian police towards delegates.

Participants at COP27 – including activists, rights defenders, and civil society groups – have raised cases of “surveillance” during the summit, which opened on November 6 at Egypt’s Red Sea resort city of Sharm al-Sheikh.

The UN Department for Safety and Security, which works with Egyptian police to secure the summit, said Monday it had “been made aware of allegations” of violations of the code of conduct and was “investigating these reports.”

Seven months into a hunger strike, Abdel Fattah began refusing water on November 6 as world leaders arrived for COP27 to protest the conditions he said he and about 60 000 other political prisoners face in the country.

Seif was heckled by pro-government attendees at two press conferences, who called her brother a “criminal”, not a “political prisoner”.

Egypt, which has sought to burnish its image by hosting the climate talks, has come under fire during the summit over its human rights record, with the fate of Abdel Fattah grabbing attention.

Good Germany complained to Egypt over their surveillance of human rights events. It was obvious security was filming speakers and audience. Egyptian Government dishonours its role of hosting #COP27 #FreeAlaa https://t.co/aU0n0aEVwJ

A German diplomatic source said a complaint was lodged with Egypt as the delegation “felt we were being watched.”

Liane Schalatek, associate director of the Heinrich Boll Stiftung foundation in Washington, said she felt “watched” and was “clearly more uncomfortable than at any other COP before.”

Schalatek, a climate finance expert who has attended COP conferences since 2008, says this time cameras in meeting rooms were directed at the faces of speakers.

“This is both unnecessary and unusual for such internal coordination meetings,” she said. “The possibility that everything is being recorded cannot be ruled out.”

Human Rights Watch had previously condemned Egypt’s “sweeping surveillance” plans, which included the installation of cameras in hundreds of taxis in Sharm al-Sheikh. 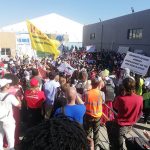