Malian president of the international basketball federation (Fiba), Hamane Niang, has stepped aside amid sexual abuse investigations within the Mali Basketball Federation (FNB).

In a statement, Fiba said it received several allegations about systematic sexual harassment within the Mali Basketball Federation on June 10 through the New York Times and Human Rights Watch.

“Upon receiving such information, Fiba immediately shared its content with the independent Integrity Officer Professor Richard McLaren who has opened an investigation into the matter,” Fiba said.

Fiba also moved to suspend three people connected to the FMB from “all Fiba activities while the investigation is conducted”. These are cocha Amadou Bamba, coach Oumar Sissoko and official Hario Maiga.

Fiba said it was alleged that Niang “knew or should have known about the sexual abuses in the Mali Basketball Federation particularly during his time at the helm of that Federation from 1999 until 2007”.

A New York Times report said over the past several months, female players from Mali described Niang as failing to take action and in some cases being present when misconduct was occurring.

“Two players, who were teenagers at the time, described a harrowing encounter during a victory celebration at a nightclub in 2006 or 2007, saying their coach laughed and groped their breasts and buttocks as he danced with them,” the report said.

Niang, however, “strongly denies the allegations”, and has “taken the decision to temporarily step aside while the investigation is conducted. He has also offered his full collaboration to the investigation”, Fiba said.

In the meantime, as per the Fiba rules, the Fiba First Vice-President Sheik Saud Ali Al-Thani has stepped up to to the acting president role.

“Fiba stresses the President’s right to the presumption of innocence and will make no further comment pending the outcome of the investigation.

“Fiba has zero-tolerance for all forms of harassment and abuse and extends its heartfelt compassion for victims of such conduct. Fiba is committed to ensuring reports of such behavior are taken seriously and properly investigated,” read the statement. 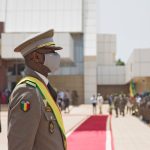