Cape Town – Rassie Erasmus commemorated his return to Springbok matchday eligibility with a celebratory dance to the song Without Me by Eminem.

Erasmus was banned by World Rugby in November last year after a video surfaced wherein he criticised the performance of Australian referee, Nic Berry, when the Springboks took on the British & Irish Lions last year. Since then, Erasmus was unable to attend Springbok matches.

“I know some will probably say its inappropriate, but its so lekka to be back at the stadiums,” Erasmus said.

I know some will probably say its inappropriate, but its so lekka to be back at the stadiums !! well done to 🇿🇦 teams and thanks for the Stormers supporters for the lekka stadium vibe 🇿🇦 pic.twitter.com/cW55owhN3E

Along with showing off some of his wholesome dance moves, Rassie congratulated the South African teams that participated in the United Rugby Championship over the weekend as the Bulls, Emirates Lions, and the Stormers were victorious.

Erasmus will be looking to get back to being with the coaches and players on match day when the Boks embark on their end-of-year tour which includes Tests against Ireland, France, Italy, as well as England.

WATCH | ‘We’re grateful the day has arrived for him to go back to work,’ Rassie’s daughters say in cute video 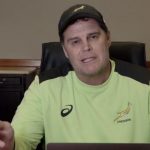 War of words carries on as Erasmus tweet upsets Lions

Lions captain Jones was ‘on a date’ with referee, says former Boks skipper

Erasmus to tour with Springboks as misconduct hearing looms

Nike to return as Springboks’ technical apparel provider in 2023