Veteran Onyango, widely regarded as one of the best shot-stoppers in Africa, made several superb saves when the hosts were clinging to a one-goal lead during the third-round match in Pretoria.

Defender Grant Kekana had nodded the former African champions into an early lead, which 2021 Premiership Footballer of the Year Shalulile doubled midway through the second half via a close-range shot.

Chiefs squandered a chance to set up a tense finish when Lebogang Manyama rattled the crossbar from a late penalty at an empty Loftus Versfeld stadium owing to the coronavirus pandemic.

“I do not like singling out individuals because football is a team game, but Denis made some big saves this evening,” said Sundowns co-coach Rulani Mokwena.

“It is never easy against Chiefs and we gave a powerful performance to succeed. There was a lot of discipline and intensity from the boys.”

“We trailed at half-time, which was not a true reflection of the opening 45 minutes as we created the better chances while conceding a silly goal.

“I do not know how we let in the second goal – it should never have happened. Then, we failed to convert a penalty that would have brought us back into the game.”

Stellenbosch and Orlando Pirates share second place with five points each and there are seven clubs with four, including 10th-place Chiefs.

Pirates followed up two draws with a 1-0 Soweto derby victory over visiting Swallows thanks to a headed goal from Tshegofatso Mabasa on 78 minutes.

German coach Josef Zinnbauer quit Pirates after losing a knockout competition quarter-final to Swallows on the opening weekend of the season and his assistant, Mandla Ncikazi, has been the acting boss since.

Stellenbosch, who are based in the winelands near Cape Town, maintained an unbeaten start with a 1-1 draw away to promoted Sekhukhune United in Johannesburg.

Argentine Junior Mendieta gave the visitors an early lead they retained until Nigerian Chibuike Ohizu levelled midway through the second half. 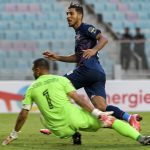