Bulawayo – Under the gaze of an enormous, old-fashioned manually-operated scoreboard, Zimbabwe came up with all the right numbers at the weekend as they qualified for the Twenty20 World Cup for the first time since 2016.

Craig Ervine’s team clinched their ticket to Australia in October when they beat Papua New Guinea in their semi-final last Friday in the country’s second-largest and southern city of Bulawayo.

They then iced the cake with a 37-run win over the Netherlands, who also qualified, in the final at the city’s Queens Sports Club, a throwback to another age when cricket did not rely so heavily on the bells and whistles of modern technology.

Established in 1890 when Zimbabwe was still the British colony of Rhodesia, the ground was inevitably named after Queen Victoria. It became a regular venue for many touring sides and hosted its first Test match in 1994.

Despite the coloured clothes and frenetic pace of a T20 match, there is still an old-world charm about Queens.

The stately pavilion stands proud and the ground is ringed by trees that create a panoramic umbrella for spectators sitting on the grass out of the sun, making it one of the most picturesque venues in the world.

But one key feature stands out: the scoreboard which reaches back into the 20th century, perhaps even earlier, for its display and methods of delivering information to the public.

A team of shadowy figures ghost their way around inside the great box, all black and yellow, manually changing names and numbers.

Adding up scores on the aged scoreboard, energetic young men, including aspiring cricketers and passionate fans, operate seamlessly in coordination with scorers waving papers from behind a glass screen in the media box some 200 metres away on the other side of the ground.

Most international scoreboards around the world are now fully digital but the old-school scoreboard at Queen’s adds to the atmosphere, occasionally churning out unintended humour for fans, with reverse or misspelt names and upside-down numbers, just some of the errors associated with manual operations at a fast turnaround.

More than a dozen youngsters physically swap in scores, led by a seasoned calligraphic artist who hand-paints player names as the game progresses.

“It has become much better now with the radios, we can quickly rectify errors,” said scorer Donald Nyoni.

“It is key to keep up with scores accurately. The unfortunate part is that the old board has no provision for new rules on umpiring decisions.”

This old scoring system calls for ‘sober habits’ but employs youths who risk being lost in a country plagued by an upsurge in drug abuse and high unemployment.

They each earn US$10 per day for operating the scoreboard but they need to be fully focused on the action in the middle and the scorers’ box opposite.

Even checking phones can be distracting and “cause a mess of the statistics,” said Admire Mupembe, in his early 20s, while shuffling through a wad of number plates to slot in.

Queens is not alone in its manual board as India still has several as does the recently built 35 000-seater Pallekele ground in Sri Lanka.

They all lend charm to proceedings and unlike digital boards, which flash away for advertisements, they offer a view of the score at all times. What the spectator misses out on, however, is the absence of replays, from different angles, and even features, including information on umpiring decisions.

The spectators at Queens are not overly concerned, however, as the Zimbabwe team marches through to the T20 World Cup, a welcome boost for a cricket nation that has been starved of recent glories.

After becoming a Test nation in 1993, Zimbabwe enjoyed its share of successes as players such as Andy Flower, Heath Streak and Henry Olonga became household names.

In recent years, alas, the game has wilted but it remains the only sport with a significant fan base cutting across the polarised political and racial boundaries, making qualification for the T20 World Cup all the more important.

The 16-team tournament runs from October 16 to November 13 with Australia defending a title they won in the UAE last year. 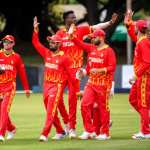 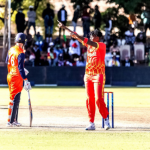 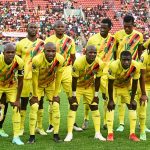 Banned Kenya and Zimbabwe to be included in 2023 AFCON draw