The 51-year-old, who took charge of the Soweto outfit in 2019, did not mention  the surprise 2-1 home defeat by Swallows in a MTN 8 knockout competition quarter-final in his farewell comments.

“I have spent the last two years away from my family and for this reason I have decided to hand in my resignation,” Zinnbauer said.

Under Zinnbauer, Pirates ended a five-season trophy drought when they won the MTN 8 last year, the highlight of a reign that included 35 victories, 20 draws and 13 losses in all competitions.

The former midfielder flopped in continental competitions, though, with Pirates humbled 5-1 on aggregate by Raja Casablanca of Morocco in a 2021 CAF Confederation Cup quarter-final.

Mandla Ncikazi, who joined Pirates during the close season to assist Zinnbauer after exceeding expectations by taking Golden Arrows to fourth in the last league, is a possible successor. 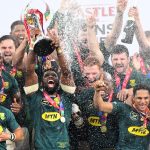