Billiat doubled the lead in first-half added time and struck again on 53 minutes to effectively end the match as a contest.

Swallows, who had scored just twice in 11 previous league matches this season, pulled one goal back just past the hour through captain Lebohang Mokoena.

Chiefs then defended stoutly to ensure three points and extend an unbeaten run in the richest African national championship to four matches.

Swallows slipped to the bottom of the table, level on eight points with Baroka and Marumo Gallants but behind on goal difference.

Billiat, 31, announced his retirement from international football in early November, just two months before Zimbabwe face Senegal, Guinea and Malawi at the Africa Cup of Nations in Cameroon.

“I believe it is time for me to pave the way for new talent to blossom and serve the country in the same way that I did, or even better,” said Billiat.

His departure is a huge blow to Zimbabwe, who fared poorly in a recent 2022 World Cup qualifying group, collecting only two points when finishing last behind Ghana, South Africa and Ethiopia.

Royal AM, a Durban club who bought the franchise of cash-strapped Bloemfontein Celtic less than a week before the season began in August after narrowly missing promotion, are third, a point behind Chiefs.

They edged fourth-placed Stellenbosch 1-0 at home in torrential rain through an early second-half goal from Tebogo Potsane.

Stellenbosch slipped to fourth, level on 21 points with Royal but with an inferior goal difference, and one point ahead of promoted Sekhukhune United.

On Saturday, Sekhukhune fell 2-0 away to Sundowns, whose goals came from Neo Maema midway through the first half and Themba Zwane, from a controversial second-half penalty.

TV replays showed a shot from Sundowns’ Namibia star Peter Shalulile struck the stomach of an opponent, but the referee ruled handball amid protests. 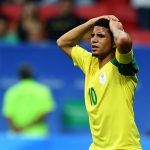