Juba – The UN envoy to South Sudan voiced concern on Thursday that time was running out for the full implementation of the country’s fragile peace deal.

South Sudan’s political rivals signed the agreement in 2018 but are still struggling to draw a line under a five-year civil war that left nearly 400 000 people dead in the world’s youngest country.

“My main concern is that the end of the transitional period is fast approaching yet progress in implementing the peace agreement has been slow,” said Nicholas Haysom, the UN secretary general’s special envoy as well as head of the UN Mission in South Sudan (UNMISS).

“With only eight months remaining, the window of opportunity to implement the key benchmarks is closing,” he told a press conference in Juba, calling on the rival leaders to make the necessary “compromises”.

A two-year transition period laid down in the accord signed by President Salva Kiir and his rival, Vice President Riek Machar, is due to end in February 2023, with elections due to be held 60 days beforehand.

But many key provisions of the deal have not been met – including drafting a permanent constitution and electoral legislation, and Haysom said the possibility of holding elections was becoming “less and less feasible”.

South Sudan’s leaders need to “redouble their efforts and agree on a roadmap with clear benchmarks, timelines and priority tasks” he said.

The landlocked country, one of the poorest on the planet despite large oil reserves, has suffered chronic instability since independence from Sudan in July 2011, spending almost half of its life as a nation at war.

The United Nations has repeatedly criticised the leadership for its role in stoking violence, cracking down on political freedoms and plundering public coffers, and earlier this year it warned the country risked a return to conflict.

South Sudan also faces grave humanitarian woes caused by the violence as well as climate-related disasters such as flooding and drought. 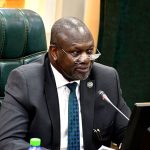