Lome – Delegations from Mali and Ivory Coast met on Thursday with Togo’s president Faure Gnassingbe who is mediating a dispute over the arrest of 49 Ivorian soldiers in Bamako, sources close to the talks said.

Gnassingbe met separately with the delegations in the presidential palace in the capital Lome, the sources said.

The Togolese presidency did not publish any statement on the meeting.

Mali’s military junta in July called for the Togolese leader to mediate in the dispute.

The 49 Ivorian soldiers were detained after their arrival at Bamako airport on July 10.

Mali has called them “mercenaries”, but Ivory Coast says they were sent to provide back-up duties for the UN peacekeeping mission in Mali.

A UN spokesperson has said that while they were not UN peacekeeping troops as such, they were part of “national support elements” routinely deployed by contributing countries.

It is also in the grip of political upheaval after colonels angry at the government’s handling of the insurgency seized power in August 2020. 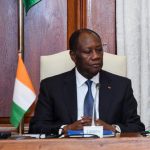