The talks, expected to run until late Tuesday or early Wednesday, will also discuss the holding of local elections due by May next year, and national reconciliation, Administration Minister Clement Sawadogo said.

The round table was launched on June 17 by President Roch Marc Christian Kabore, who said he was looking for national consensus on how to end the Sahel country’s six-year-old security crisis.

But the opposition suspended the talks three days later, demanding the resignation of the ministers for security and defence over attacks in the northeastern village of Solhan that left at least 132 dead.

After protests that drew thousands of demonstrators, Kabore sacked the pair and took over the defence portfolio himself.

“The conditions that we set down have been met,” said opposition leader Eddie Komboigo.

“We should celebrate that in our country we have the ability to dialogue, to work together – it’s a glue, essential for us to be able to build our country together,” said Vincent Dabilgou, chairing the coalition of pro-government parties.

The Solhan attacks on June 4 were the deadliest since a jihadist insurgency in neighbouring Mali spilt over into Burkina in 2015.

The armed groups are linked to al-Qaeda and the so-called Islamic State.

More than 1 500 people have died in the attacks, which have forced at least 1.4 million people to flee their homes since 2015. 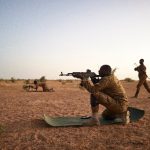