Mogadishu – Somalia’s parliament elected a veteran politician as speaker of the lower house on Thursday, as the fragile nation edges closer to holding a delayed presidential vote.

The election is well over a year behind schedule, marred by deadly violence and a power struggle between the current president and the prime minister.

Somalia’s international partners have been pushing for the process to pick up speed, fearing the delays were distracting from the country’s myriad problems including the fight against al-Shabaab jihadists and the threat of famine.

Following the election of the upper house speaker on Tuesday, lawmakers in the lower house chose Sheikh Adan Mohamed Nur, better known as Sheikh Adan Madobe, as speaker in a drawn-out process that extended into two rounds and only concluded in the early hours of Thursday.

The vote took place in a tent inside Mogadishu’s heavily-guarded airport complex under tight security, following a spate of attacks in recent weeks by al-Shabaab which has been waging an insurgency against the government for more than a decade.

It had been due to take place on Wednesday but was delayed by a dispute over who should provide security at the venue, highlighting the continuing rifts between President Mohamed Abdullahi Mohamed, better known as Farmajo, and Prime Minister Mohamed Hussein Roble.

Madobe, 66, who had previously served as speaker between 2007 and 2010, secured 163 votes out of the 252 ballots cast. He is not known to be allied with either the president or prime minister.

Farmajo congratulated Madobe, saying in a statement that he hoped his election “becomes a starting point for a greater change that saves the country”.

Roble also offered his congratulations on Twitter, urging the speakers of both houses to “carry out their responsibilities and conduct the presidential election in a transparent, prompt and peaceful manner”.

On Tuesday, 76-year-old Abdi Hashi Abdullahi was re-elected speaker of the upper house.

Parliament will now set a date for lawmakers to choose a president – the country has not held a one-person, one-vote election in 50 years.

Farmajo’s mandate expired in February 2021 but in the absence of agreement on elections, he tried to extend his rule by decree, sparking violent street battles in Mogadishu.

Under pressure from the international community, he appointed Roble to seek consensus on a way forward.

But the pair’s disagreements have hindered progress and stoked fears of further instability.

In addition, a crucial IMF three-year $400 million (380 million euros) financial assistance package for Somalia will automatically expire in mid-May if a new administration is not in place.

On Wednesday, Somalia’s international backers warned that “political tensions and security incidents must not be permitted to disrupt (the election’s) final stages”.

“We urge all Somali leaders to exercise restraint, resolve differences through compromise, and avoid escalation of any incidents.”

Polls in Somalia follow a complex indirect model, whereby state legislatures and clan delegates pick lawmakers for the national parliament, who in turn choose the president.

The voting process has seen a number of attacks by the Al-Qaeda-linked Al-Shabaab which frequently strikes at civilian, military and government targets in Somalia’s capital and elsewhere in the country.

The jihadists controlled Mogadishu until 2011 when they were pushed out by an African Union force, but still hold territory in the countryside. 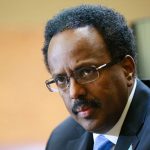