It is the first time since the historically stable West African country’s independence in 1960 that the ruling party’s camp has lost that majority and will have to rely on other forces in parliament to pass legislation.

The president’s coalition, which includes his party Alliance for the Republic (APR) and other parties, won 82 seats of the National Assembly’s 165, the national vote-counting commission said, down from the 125 it won in 2017.

Opposition parties had already begun gaining momentum in municipal elections in January, when they won major cities including the capital Dakar, Ziguinchor in the south and Thies in the west.

In Sunday’s election, they gained 80 seats in total in the single-chamber parliament.

Three other seats were won by three small coalitions, who could serve as kingmakers.

The final figures are to be published by the country’s highest court within five days of the announcement, if no parties appeal the results.

For Sall, who has been accused by the opposition of wanting to break the two-term limit and run for president again in 2024, the disappointing legislative results could curb any such ambitions.

The president, who was elected in 2012 for seven years and re-elected in 2019 for five years, has so far remained vague about his future plans.

He has, however, promised to appoint a prime minister – a position he abolished in 2019 and reinstated in December 2021 – from the winning party of Sunday’s election.

On Monday, both the opposition and Sall’s ruling coalition claimed to have won the vote.

The main opposition coalition, Yewwi Askan Wi (which means “Liberate the People” in Wolof), had formed an alliance for the election with the Wallu Senegal (“Save Senegal”) coalition, led by former president Abdoulaye Wade.

They won 56 and 24 seats respectively, the results Thursday showed.

Earlier on Thursday, the opposition alliance asked the electoral commission for “the right to verify the minutes (of polling stations) in order to make observations and possible claims within the legal deadlines”.

Aida Mbodj, another opposition leader, on Wednesday accused the government of “ballot box stuffing” in the northern regions of Matam, Podor, Ranerou and Kanel, all strongholds for the president.

But he was prevented from running in Sunday’s vote over a technicality.

On Wednesday, he said the opposition would “not allow victory to be confiscated”.

“We reject these results,” added Dethie Fall, one of the opposition alliance leaders, on Thursday after the official announcement.

Sall on Wednesday however said the elections had run smoothly, “in calm, serenity and transparency”.

Late on Thursday, Sall tweeted in praise of the Senegalese people for the “exemplary nature of our democracy, the credibility of our electoral system”.

The presidential coalition will pursue “reforms essential to the construction of a united, prosperous Senegal with the rule of law”, said former prime minister Aminata Toure, who led the coalition’s list in the elections.

Voter turnout was a little below 47 percent, the national vote-counting commission said.

International observers from the Economic Community of West African States (ECOWAS) and the Collective of Civil Society Organisations for the Elections (COSCE) said the vote was peaceful and transparent.

Senegalese lawmakers are elected according to a system that combines proportional representation with national lists for 53 lawmakers and majority voting in the country’s departments for 97 others.

The diaspora elects the remaining 15 members of parliament.

While the 21-day election campaign passed in a mostly calm atmosphere, the pre-campaign period was marked by violent demonstrations that left at least three people dead.

Those followed a decision by the interior ministry — which was confirmed by the country’s highest court – to toss out the first-choice election candidates submitted by Yewwi Askan Wi, citing technical grounds.

The ban, which applied specifically to first-choice candidates for seats contested by national lists, barred Sonko from running.

He said this was due to “the high cost of food, the increase in the price of water (and) the authoritarian practices around the demonstrations, followed by deaths”. 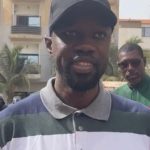