Abuja –  Nigeria senators on Thursday passed an electoral law reform aimed at improving transparency ahead of elections in 2023, but the opposition voiced reservations over how results should be transmitted.

President Muhammadu Buhari will be stepping down after serving two four-year terms.

Africa’s most populous country has struggled with electoral violence, widespread claims of fraud and court challenges to results since returning to democratic civilian rule in 1999.

Nigeria’s Independent National Electoral Commission (INEC) came under fire after Buhari’s re-election in 2019 over claims the ballot was not free or transparent.

The opposition challenged the results in court in part because of concerns over the legality of the electronic transfer of ballot tallies.

On Thursday, Senate speaker Lawal Ahmad said: “All of us here… believe that our country should have an electoral system where electronic transmission will be part and parcel of the process.”

For his part, ruling APC party Senator Sabi Abdullahi said the INEC should use the electronic transfer of results only with the approval of the communications regulator NCC and the National Assembly.

But opposition PDP senators disagreed, saying the INEC should work without interference from the NCC or the parliament.

We believe that the unfettered independence of INEC is important to uphold the integrity and credibility of the electoral process. This means that INEC must not be subject to direction by the NCC.

“We voted that it should not (be) dependent on any other external body, including the National Assembly,” said Senator Matthew Urhoghide.

“We said no. You are going to burden INEC and threaten its independence,” he added.

Buhari won 56% of the 2019 vote, but his opposition candidate Atiku Abubakar of the Peoples Democratic Party (PDP) filed a challenge in the Supreme Court claiming irregularities.

The court upheld Buhari’s election, but concerns over fairness and transparency of the electoral process and INEC remained.

EU observers had reported serious problems with the election.

Political analysts said the new law would not address flaws in the electoral process.

“Involving other government agencies will create unnecessary bottlenecks that will not be in the best interest of conducting free and fair elections in Nigeria,” he told AFP.

The bill now goes to the lower chamber – the House of Representatives – and must also be assented to by the president.

Nigeria has a long history of troubled elections.

The 2007 vote that brought late president Umaru Yar’Adua of the PDP to power was marred by irregularities, prompting him to launch electoral reforms. But a committee’s recommendations were never implemented.

In 2011, more than 800 people were killed in post-election violence in northern Nigeria, according to Human Rights Watch.

Nigeria ‘negotiations’ with Twitter set to begin after suspension 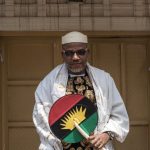