Cape Town – The Parliament’s standing committee on public accounts (Scopa) has given President Cyril Ramaphosa seven to ten days to reply to its letter regarding a leaked audio recording implicating him.

In the audio, Ramaphosa admits to being aware of certain individuals within the party who used public funds to further advance their political campaigns.

He can be heard saying he is “willing to fall on the sword” to protect the ANC rather than reveal the party members’ names because he is concerned about the image of the party.

This comes after suspended ANC MP Mervyn Dirks wrote a letter to the Scopa last year, bringing the contents of the audio to its attention.

According to The Citizen, ANC’s head of the presidency Sibongile Beni confirmed the authenticity of the leaked audio but denied suggestions that Ramaphosa was attempting to shield party members by covering up information on corruption.

Scopa chairperson Mkhuleko Hlengwa was quoted by the paper as saying:

“The committee resolved that they will write to Ramaphosa requesting his explanation on the matter instead of issuing him with a summons, as he had not shown any intention to not cooperate with the committee regarding the investigation.”

The same complaint has now been received by the office of the public protector, according to eNCA.

Spokesperson Oupa Segalwe confirmed that a complaint, in which a Member of Parliament has alleged a breach of the Executive Code of Ethics against the President has reached their office.

“The complaint was lodged in terms of the Executive Members Ethics Act 82 of 1998 (EMEA). The PPSA has been inundated with queries about the complaint since the sitting of the Standing Committee on Public Accounts earlier in the week,” the report quoted Segwale as saying. 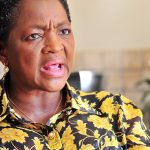