It is the smallest number of candidates to be cleared to stand for the top job in the East African powerhouse since multiparty democracy in the early 1990s.

Only four candidates “met the requisite constitutional and statutory requirements” from a shortlist of 17, the Independent Electoral and Boundaries Commission (IEBC) said in a statement late Monday.

Aside from Ruto and Odinga, the other candidates vying for the presidency in the August 9 vote include lawyers David Mwaure and George Wajackoyah a former spy who once went into exile in Britain.

More than 50 aspirants had expressed interest in standing to succeed President Uhuru Kenyatta, who must stand down after serving the maximum of two five-year terms.

This year’s contest is shaping up to be a two-horse race between the president’s erstwhile ally Ruto and 77-year-old former opposition leader Odinga, who now has the backing of Kenyatta.

Wajackoyah, an eccentric lawyer, is running on a pledge to expand the executive, reduce the working week to four days and legalise marijuana.

Mwaure, who had shown interest in running in 2013 but later shelved his candidacy, has pledged to crack down on corruption, a hot-button issue in Kenya.

All the candidates save for Ruto have chosen women as their running mates, which, should they win, would open the door to Kenya’s first female deputy president.

A mainstay of Kenyan politics, Odinga remains hugely popular despite losing four shots at the presidency.

But his fiery anti-establishment image took a knock following his 2018 reconciliation with Kenyatta.

Ruto, 55, was initially anointed by Kenyatta as his successor but found himself marginalised after the 2018 pact between the president and former foe Odinga.

A former agriculture minister, Ruto has lambasted Kenyatta over his economic policies including the country’s huge debt burden, vowing to undo them if elected.

With its diverse population and ethnic voting blocs, elections in Kenya have often been marred by violence.

Both Kenyatta and Ruto had been indicted by the International Criminal Court on crimes against humanity charges for their alleged role in orchestrating post-poll violence in 2007 that cost more than 1 100 lives.

The case collapsed in 2016 after the court declared a mistrial citing troubling incidences of witness interference.

After post-election fighting in 2017 left dozens dead, Kenyatta and Odinga announced a rapprochement, saying they hoped to end repeated cycles of poll-related violence. 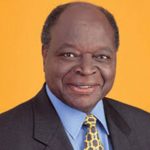