Nairobi – Ethiopia’s government and Tigrayan rebels agreed on Saturday to facilitate immediate humanitarian access to “all in need” in war-stricken Tigray and neighbouring regions.

The pledge was contained in a declaration following talks in the Kenyan capital Nairobi this week on the full implementation of a peace deal signed between the warring sides 10 days ago.

The two sides have also agreed to establish a joint committee to implement the agreement to disarm fighters with the Tigray People’s Liberation Front (TPLF), it said.

The African Union Commission said it “applauds the parties on these significant confidence-building measures and encourages them to continue towards the full implementation of the Cessation of Hostilities Agreement, as part of overall efforts to end the conflict and restore peace, security and stability in Ethiopia”.

The government and the TPLF on November 2 signed a “cessation of hostilities” agreement in South Africa which has been hailed by the international community as a crucial first step in ending a brutal two-year war in northern Ethiopia.

The restoration of aid to Tigray, a region of six million people which is in the grip of a severe humanitarian crisis, was one of the key planks of the deal. 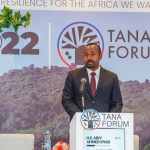