Cape Town – The Economic Freedom Fighters (EFF) has disbanded all of its structures in Limpopo as a result of the party’s poor performance in the province during the municipal elections last November, EFF leader Julius Malema has said.

Malema said this on Tuesday while addressing the media in Johannesburg.

According to The Citizen, the EFF held its plenum over the weekend in Boksburg, Ekurhuleni where its highest decision-making structure Central Command Team (CCT) concluded on disbanding the party’s Limpopo structure, saying a team of six people, led by Mbuyiseni Ndlozi, would be sent to the province to elect new leaders.

“In the last elections they only increased votes by 1 000 which was a sign that they were stuck … and we should have intervened then. As a result, the central command team resolved to disband the Limpopo provincial command team, all regional command teams, and branch command teams,” IOL quoted Malema as saying.

Those who would be deployed to the province include Rebecca Mohlala, Mgcini Tshwaku, Jannette Komane, Thembi Msane, and Leigh-Ann Mathys.

This is not the first time the EFF has taken this approach.

In 2016, it disbanded provincial structures in both KwaZulu-Natal and Eastern Cape ahead of the 2019 general elections, and the decision seemed to have paid off, as both provinces made progress in the recent municipal elections.

“Today we are celebrating KZN and the Eastern Cape, KZN being the first province to have seven deputy mayors of the EFF. It is through those interventions that were made earlier. When we disbanded the KZN at that time, a lot of people doubted what we were doing and actually even accused us of purging people because they were not supporting us and for factional reasons … we explained that it was purely organisational reasons… they performed badly and beyond our expectation and then we had to intervene. The same thing is repeating itself in Limpopo,” said Malema. (Watch the video above) 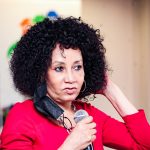 ‘We’re are not scared of him,’ says Julius Malema as he takes aim at Zondo over Lindiwe Sisulu criticism