Ouagadougou – The army officers who have seized power in Burkina Faso said in televised comments on Saturday that toppled junta leader Paul-Henri Sandaogo Damiba was planning a counteroffensive from a “French base”.

Damiba “is believed to have taken refuge in the French base at Kamboinsin in order to plan a counter-offensive to stir up trouble in our defence and security forces”, they said in a statement read out on national television and signed by Captain Ibrahim Traore, the country’s new strongman.

An hour before the televised comments by the military figures, who overthrew Damiba on Friday, the French embassy issued a statement “firmly denying any involvement of the French army in the events of the last few hours”.

The embassy also denied “rumours that Burkinabe authorities have been hosted or are under the protection of French military”.

Soldiers who took power in Burkina Faso yesterday have appeared on state tv this evening, accuse Lieutenant-Colonel Paul-Henri Sandaogo Damiba, who was deposed yesterday, of “planning a counter-offensive”, and claim he’s doing this from a French base. pic.twitter.com/TbdvYj5cVo

According to the coup plotters, the actions by Damiba and the French forces are in response to their willingness “to go to other partners ready to help in the fight against terrorism”.

No country was explicitly mentioned but Russia, whose influence is growing in French-speaking Africa, is among the possible partners in question.

France has a military presence in Burkina Faso, with a contingent of special forces based in Kamboinsin which is some 30 kilometres (19 miles) from the capital Ouagadougou.

Damiba himself came to power in a coup in January.

He had installed himself as leader of the country of 16 million after accusing elected president Roch Marc Christian Kabore of failing to beat back jihadist fighters.

With much of the Sahel region battling a growing Islamist insurgency, the violence has prompted a series of coups in Mali, Guinea and Chad since 2020.

The situation in Ouagadougou was tense on Saturday, with gunfire and the deployment of soldiers in the streets, raising fears of clashes between Damiba’s supporters and the country’s new strongmen.

The new putschists were quick to introduce an overnight curfew. 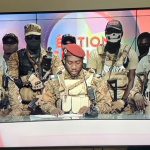