Ouagadougou – Burkina Faso’s government on Saturday announced an investigation into allegations that the army opened fire on villages in the north earlier in the week, killing several civilians.

Troops fired shells at four villages near their military camp, according to a statement by the UN High Commissioner for Human Rights (OHCHR) addressed to the government in Ouagadougou.

Reports also circulated on social networks, claiming that tens of civilians were killed in these incidents.

The OHCHR said it could not “establish an exact toll”.

The 14th Inter-Arms Regiment based in Djibo in the north of the landlocked Sahel state is alleged to have been involved in the incidents.

“Whenever allegations of human rights violations are made against our defence and security forces during anti-terrorist operations, thorough investigations are carried out, with a view to shedding light on and punishing the perpetrators of established violations,” government spokesman Jean-Emmanuel Ouedraogo said in a statement.

The government points the finger at “armed terrorist groups used to manipulation and disinformation”.

Ouedraogo urged national and international opinion “not to fall into these perfidious traps orchestrated by desperate terrorists with the aim of stigmatising” the security forces, insisting the authorities were “particularly concerned about respect for human rights” in the “fight against terrorism”.

One of the world’s poorest countries, Burkina has been struggling with a jihadist offensive since 2015.

Disgruntled army officers have carried out two coups this year in a show of anger at failures to roll back the insurgency.

The military base lies in Djibo, a major northern town that has been under a jihadist blockade for three months.

Ten soldiers were killed and another 50 wounded in a “terrorist” assault on the 14th regiment last month.

The deterioration in the security situation has been used to justify the two coups this year.

The second in September saw Captain Ibrahim Traore come to power as he and his supporters ousted Damiba.

Traore has been appointed transitional president with the declared aim of taking pack huge swathes of territory held by “hordes of terrorists”. 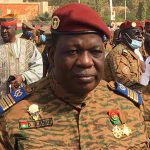 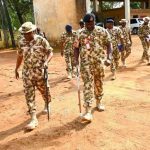