Beni – Democratic Republic of Congo’s army said on Tuesday it had killed 11 members of the Allied Democratic Forces (ADF) militia, which the Islamic State group claims as its local affiliate, in the east of the country.

The ADF is one of the most violent of the more than 120 militias that roam the Democratic Republic of Congo’s troubled east.

The group has been blamed for thousands of deaths in the provinces of North Kivu and Ituri, and for bomb attacks last year in Uganda.

Captain Antony Mualushayi, a spokesman for the Congolese army in the North Kivu town of Beni, said that troops had killed 11 ADF fighters on Tuesday.

The previous day, soldiers had killed eight members of the Mai-Mai Mazembe militia in Lubero territory in North Kivu. Two soldiers died during those clashes, “on the field of honour”, Mualushayi added.

The term “Mai-Mai” is widely used in the DRC to describe armed groups that claim to represent communities in ethnic feuds.

Congolese President Felix Tshisekedi replaced the civilian administrators of North Kivu and Ituri with members of the security forces in a bid to stem violence.

Rebel attacks on civilians have continued, however. 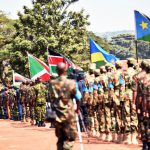