Harare – Doctors and nurses across Zimbabwe returned to work on Saturday after a week-long wage strike despite their demands not being met, accusing the authorities of unspecified threats against workers.

The associations of the doctors and nurses said in a statement that it had noted with “great concern… attempts by some authorities to threaten and victimise the workers”.

“Asking for a living wage should never be viewed as a crime,” they said.

With the government delaying in engaging in further wage negotiations, the workers decided to temporarily halt the strike on compassionate grounds.

They gave government 14 days to address their demands.

“This has been done to prevent any further loss of life,” they said.

“It is never the intention of the healthcare workers to walk away from those who need their help,” the associations said in a joint statement.

Nurses earn 18 000 Zimbabwe dollars per month, which is worth around US$55 at the official exchange rate, not enough to buy 15 loaves of bread.

The medics also said that a lack of basics such as paracetamol and bandages in hospitals made their jobs difficult.

Patients in Zimbabwe’s public hospitals already have to buy their own supplies to bring to the long-neglected wards.

Runaway inflation in Zimbabwe jumped 60 percentage points and topped 191% this month, reviving memories of the hyperinflation seen more than a decade ago.

Prices ran so out of control in 2008 that the central bank issued 100-trillion-dollar note, which has now become a collector’s item.

That represents more than 10% of all the nurses working in Zimbabwe’s public hospitals. 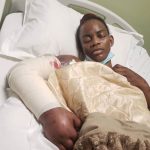