Cape Town – Eden Park Secondary School in Alberton on the East Rand has reportedly suffered another blow following a fire that destroyed two mobile classes over the weekend.

Reports said the school already had a shortage of classrooms.

It was reported that two classrooms burned to the ground while two more were affected.

According to Ekurhuleni EMS spokesperson, William Ntladi the city’s emergency services responded to the fire just after midday on Sunday, reported TimesLIVE.

“We attended that call and we found two classes were burnt down completely and these are the mobile classes,” the report quoted Ntladi as saying.

The report said firefighters managed to put out the fire and recover some items from the two classrooms the fire had spread to.

“We had a total of about eight classes around there and two of them burnt down but the other two we managed to salvage something out of them. As to what actually caused the fire, that is still a mystery to us and is still under investigation,” Ntladi said.

According to the Alberton Record, the fire was spotted by residents who had come to lock the toilets at the school just after lunch.

Community leader, pastor Anthony Wynkwaardt who was one of the few residents at the scene was more concerned about the impact this would have on grade eight and 10 learners at the school who were already disadvantaged due to the lack of classrooms, the report said.

“They are still attending classes as per the lockdown rules due to a shortage of classroom facilities and now this,” said Wynkwaardt as per the report. 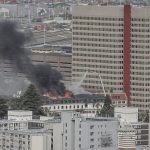