Cape Town – Former president Jacob Zuma is set to spend his birthday in hospital where is currently undergoing tests after falling ill on Sunday.

Zuma is turning 80on Tuesday.

According to The Citizen, the Jacob Zuma Foundation spokesperson Mzwanele Manyi told eNCA that Zuma was supposed to meet with his lawyers on Sunday when he started feeling unwell.

“I’m not a liberty to disclose the exact details of that unwellness. We just thought it’s one of those things that you sleep over and wake up and its all gone. But it looks like the next morning the situation actually deteriorated further,” said Manyi.

“The doctors have looked at the situation and even for them to find certainty they have to run tests. He has to be observed now over a period, I don’t know what period, but that’s how things stand right now,” the report quoted Manyi as saying.

Zuma’s much-postponed corruption trial was expected to have resumed with witness testimony on Monday in Pietermaritzburg.

The trial, however, ran into fresh legal delays and health problems, as Zuma launched a new procedural battle on the eve of his 80th birthday.

The former president faces 16 counts of fraud, graft and racketeering over the purchase of fighter jets, patrol boats and equipment while he was vice president in the 1990s.

The closely-followed trial started in May 2021 after repeated postponements as Zuma’s legal team battled to have the charges dropped.

Zuma’s defence asked the High Court to postpone the case to allow him to exhaust his options of appeal in a complaint against the lead prosecutor, Billy Downer.

Meanwhile, Carl Niehaus, the spokesperson of the disbanded uMkhonto we Sizwe Military Veterans Association and an avid supporter of Zuma, posted a birthday message for the former president on Twitter.

My personal birthday message to @PresJGZuma on the occasion of his 80th birthday. Nxamalala thank you for everything. We love you. 🙏🏾✊🏾 pic.twitter.com/bSxGVwS5eW

“…ANC leaders who are now in government have turned against you, betrayed you, hunted you like an animal. I will stand with you together with so many other comrades. We will never betray you, for us, you are our commander,” he said. 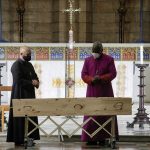