Antananarivo – A trial will begin on Monday in Madagascar for 21 people accused of planning a coup d’etat, including two French men and their wives.

Arrested on July 20, Paul Rafanoharana, Philippe Francois and their wives are accused of endangering the security of the state, criminal conspiracy and a plot to assassinate President Andry Rajoelina.

The chief prosecutor accused them of “putting together a plan to eliminate or neutralise various Malagasy public figures including the head of state”.

They deny all involvement.

Together with 17 other accused, the four are set to appear at the Anosy courthouse in Madagascar’s capital Antananarivo.

It was not immediately clear whether journalists will be allowed to attend the public hearing, which defence lawyers said should last three or four days.

Defendant Rafanoharana, who is French-Malagasy, is a former adviser to the president.

Meanwhile Francois, a former colonel in the French army, ran an investment company in Madagascar called Tsarafirst. The two men were partners for a short time in the business.

Arlette Rafanomadio, defending Rafanoharana and his wife, told AFP the hearing is “an unfair trial”.

“We haven’t had enough time to prepare our defence strategy and access to our clients has been difficult,” she complained.

In a case whose supporting documents run to 400 pages, she spoke to her clients for just half an hour on Friday, Rafanomadio added.

A group of Francois’ former classmates at France’s elite Saint-Cyr military academy said in a statement that they were “certain of his innocence”, calling for “the calmest debates possible and respect for the defendants’ rights” during the trial. 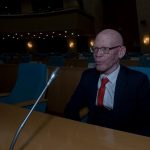