Lome – Togo has charged two journalists who have been critical of the government with “contempt of authority” and “spreading false statements on social media”, their lawyer said on Saturday.

Ferdinand Ayite and Joel Egah, editors of the bi-weekly L’Alternative and the weekly Fraternite respectively, were arrested and detained on December 10 over comments made during an online broadcast.

“The two journalists were transferred on Friday to the Lome prison” in the capital, their lawyer Elom Kpade said.

A third journalist who also took part in the broadcast, Isidore Kouwonou, had been placed under judicial supervision, he added.

Amnesty International earlier this month called for Ayite and Egah’s release, denouncing what it called an “arbitrary detention” and accusing the authorities of wanting to “silence critics”.

The small West African state, which has been ruled since 2005 by President Faure Gnassingbe, is often accused by rights groups of cracking down on opposition figures and the media.

L’Alternative was suspended in February for four months in a case involving Housing Minister Koffi Tsolenyanu.

Before that, it had already been suspended in March 2020, after a complaint from the former French ambassador to Togo.

The newspaper Fraternite was also suspended in March 2020 for two months, following an article denouncing the suspension of two other newspapers. 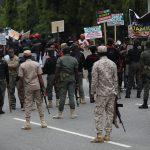