Johannesburg – South Africa said on Sunday it will push for the African Union to get a seat at the G20, as leaders from the world’s top economies gather in Indonesia next week.

A spokesperson for President Cyril Ramaphosa, said South Africa will help table a framework for the continental group to officially join the club of rich nations.

“It’s important that the collective voice of the continent is represented within that platform,” presidential spokesperson Vincent Magwenya told a press briefing.

“It is our sincere hope that that proposal will find favour and be endorsed by the member countries of the G20”.

South Africa is currently the only African member of the G20.

Senegalese President Macky Sall, who heads the African Union, has previously called for an overhaul of international governance, and urged greater African representation on bodies such as the UN Security Council and the G20.

In October, Sall said multilateralism had to “serve the interests of all” or else face the “loss of legitimacy and authority.”

Both Sall and Ramaphosa are due to attend the G20 leaders’ summit on the Indonesian island of Bali next week.

US not trying to ‘outdo’ world powers in Africa, says Blinken 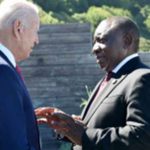