Pretoria – South Africa said on Monday it had formally filed a request with the United Arab Emirates to extradite two brothers accused of orchestrating industrial-scale corruption in the country.

Business tycoons Atul and Rajesh Gupta were held in Dubai last month on suspicion of fraud and money laundering.

They are alleged to have colluded with former president Jacob Zuma to siphon off state assets from Africa’s most advanced economy.

“We can confirm that the extradition request has been duly submitted to the UAE central authority today,” Justice Minister Ronald Lamola told a press conference.

The request is the first step in a process that experts have warned could take years.

South Africa’s case centres on an alleged 25-million-rand ($1.6-million) fraud linked to an agricultural feasibility study -small fry compared to the scale of other allegations facing the family.

The ultra-wealthy brothers ran a sprawling family business empire in South Africa for more than two decades after migrating from India.

Their arrests followed the inking of an extradition treaty between Pretoria and the UAE.

The pair fled to the emirate in 2018 at the start of an anti-corruption push.

An investigation found that they paid bribes for state contracts and wielded influence over ministerial appointments in a scandal that tainted Zuma’s administration and eventually forced him from office. 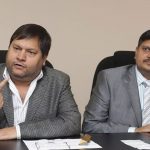 The Guptas: A family at the heart of South Africa’s graft woes