Kigali – Rwanda insisted on Wednesday it was still ready to take in asylum seekers being deported by the UK under a controversial deal after a first flight was cancelled following a court injunction.

“Rwanda stands ready to receive the migrants when they do arrive and offer them safety and opportunity in our country,” Makolo told AFP.

“The current situation of people making dangerous journeys cannot continue as it is causing untold suffering to so many.”

A first flight was due to take off from Britain for the East African country late Tuesday despite a flurry of legal challenges but was cancelled after a last-minute order by the European Court of Human Rights (ECHR).

The UK’s policy of expelling asylum seekers to a country thousands of kilometres away has been branded “immoral” by church leaders in England and heavily criticised by the UN refugee agency and rights groups.

But the government in Kigali, which is frequently accused of rights abuses, has rejected criticism that Rwanda is not a safe country for migrants.

“We don’t think it is immoral to offer a home to people,” Makolo told a press conference on Tuesday, saying Rwanda was ready to welcome thousands of migrants.

“We do not consider living in Rwanda a punishment.”

The deal was to be funded by the UK to the tune of up to £120 million ($145 million), with observers seeing it as a way of bolstering Rwanda’s image and deflecting concern over its human rights record.

On the streets of Kigali, some Rwandans were concerned that if the migrants did not come, it would be a lost opportunity for the tiny country of 13 million people in the Great Lakes region of Africa.

“The fact that these migrants have not come is a loss to the country and the general public because their livelihoods would have benefited us and we would have been working together, and now it is obvious that this is a loss,” businessman Emmanuel Hakizimana told AFP.

The manager of the Hope Hostel where the asylum seekers were to be housed on their arrival declined to comment on the cancelled flight, referring all queries to the government.

Eric Danny Manzi, a Kigali barber, said he was concerned at the potential damage to Rwanda’s reputation caused by the confusion.

“Having such news that they cancelled at the last minute gives us a bad image, now we are at a loss because the services we would have given them will not be given,” he said.

“We have helped other people before. I heard the foreign minister say that some money will be given to Rwanda because it has received these refugees and they have skills which they can share with Rwandans,” added Kigali student Zephanie Mgabonzima.

“It was an opportunity for us.”

“The power of the people backed by a court was stronger than the people in power.” 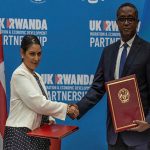